PPA Theory of Change is approved by the Deliberative Council

Since the beginning of 2021, the Parceiros pela Amazônia (PPA) Platform has been undergoing an intense process of institutional review, from the strengthening of its internal governance, the consolidation of its portfolio and the definition of its value proposition for the development of Sustainable Amazon(s).

In the last week, the second meeting of the PPA Deliberative Council of 2022 took place virtually. On the occasion, the counselors present validated the Platform Theory of Change, the result of a collective construction with members and partners.

The discussion forum was attended by leaders from the institutions Alcoa, Ambev, Beraca, BH26, Cargill, DD&L, Fundo Vale, Instituto humanize and Hydro, in addition to the founding organizations of PPA, USAID Brasil and Aliança Bioversity/CIAT.

The meeting was conducted by Augusto Corrêa, Executive Secretary of the PPA, who presented to the councilors the collaborative results, the main highlights of the Platform and, not least, its Theory of Change, the result of open consultations and the adoption of innovative and inclusive methodologies.

For Eduardo Rocha, Engagement Manager at PPA, “the advances made and the achievements achieved in recent years are the consequences of a broad engagement of the network, which generated many lessons learned. Today we can say that the PPA is effectively a reflection of the interests and priorities of the Platform's partners”.

Ana Carolina Szklo, counselor of the PPA and Sustainability Manager of the Humanize Institute, recognized the participatory and collaborative work led by the Executive Secretariat and described the PPA's vision as “expressive and that captures the idea of plurality in the Amazon”. 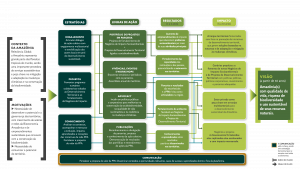 The document sets out the Platform's vision:

“Amazon(s) with quality of life, rich biodiversity and sustainable use of its natural resources”.

At TdM, communication appears as a transversal strategy, pertinent to all the lines of action indicated. It is also understood that from this effort the Platform will be able to play a more active role in influencing public and corporate policies, through the line of action of advocacy. As an impact, the PPA wants to provide favorable scenarios in the territory for the promotion of new Social and Environmental Impact Businesses and Territorial Development Projects. The private sector remains a key actor on the agenda, and an important one to strengthen the Platform as a multisectoral organization.

The PPA appreciates the contributions of all institutions participating in the Council and will soon disclose its strategy for the implementation of new collective investments. The recently approved PPA Theory of Change can be consulted in its entirety through this link or in the 'About Us' section of the website ppa.org.br.